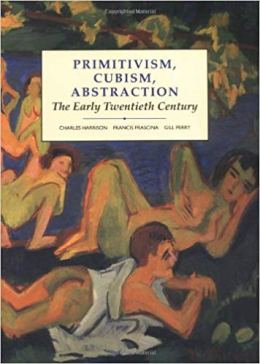 Primitivism is an area within art history that is most famously associated with artist Paul Gauguin. He often traveled to tropical areas such as Tahiti where he believed that he was observing primitive cultures that were untouched by the modern world. Largely, this was not the case, but in turn, Gauguin along with many artists who followed, began to paint native people in a basic, unassuming way.

Towards the later half of the 19th century and into the 20th century, artists began to form primitivist artist colonies in Germany and France. The fauvists and German expressionists would later follow.

In Primitivism, Cubism, Abstraction: The Early Twentieth Century, Perry, Frascina and Harrison begin by focusing the beginning of their catalog on the work of the primitivists and then moving into the works of the cubists and abstractionists, thereby creating a thematic and seamless look at the movement of art from and through the 19th and early 20th century.

Harrison was a professor at The Open University in the United Kingdom. He made many contributions to the humanities and more specifically the arts. He passed away in August of 2009. His full obituary is available through the University’s website.

Frascina is a is John Raven Professor of Visual Arts in the Department of American Studies at Keele University in the United Kingdom. According to the University’s website Frascina “founded the Department of Visual Arts at Keele University in 1994 and served as Head of Department from January 1994 to October 1998. He formerly held academic posts in Fine Art at Leeds University and in Art History at the Open University. His research interests include the social history of modern art and modernism and the relationships between art, culture and politics in America since 1945.”

Perry is the co-chair of the Gender in the Humanities Research Group in the Arts Faculty at Open University in the United Kingdom, and was the Reviews Editor of the journal Art History from 1995 – 2001. Along with her accomplishments with in the University, she has also written several books and catalogs. According to the University’s website, she is also a panel member (Panel 2) of the Arts and Humanities Research Council, the main UK funding council for academic research.

Primitivism, Cubism, Abstraction: The Early Twentieth Century by Gill Perry, Francis Frascina and Dr. Charles Harrison was first published on May 26, 1993 and is available for purchase through the Yale University Press with ISBN 0300055161.