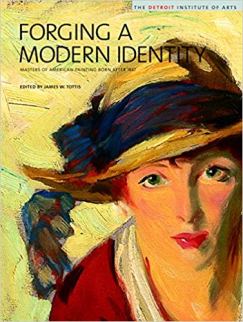 There are many books written about modern American painting. Many serve as a general overview of the period and some go into great detail and discussion over a specific artist or movement. What sets James W. Tottis’ catalog apart from other art books such as these is that along with strong, well-researched essays, he has also included high resolution details of larger works that coincide with specifics discussed in the text.

Such an inclusion helps to further engage the reader about the material that is being debated and discussed. It offers readers a different view, a more in-depth vision of the works themselves as well as the period of art history with which they were created in. They truly bring a part of art history to life.

America Forges Its Own Identity

Moreover, looking at the period in general, James W. Tottis has chosen a significantly interesting time to further explore and present. Tottis includes works from the later 19th century and first half of the 20th, a time where America was changing drastically. In art alone, there was a large movement from away traditional landscape and historical narrative paintings. At this time, America itself was forging ahead, creating a new identity and moving towards a modern nation. Artist of the time were creatures of their environment and what was being created was largely based on the study of human form, society figures and everyday scenes.

Laying the Ground Work for the Abstract

From this breaking away from the traditional artists such as Mary Cassatt and Marsden Hartley were laying the ground work for what would inevitably follow in movements to come – abstraction of the human form and a general moving away from it all together.

Tottis does a great service to his readers by including many of the more well-known artists of this transitional period within the American art historical timeline. The text that he includes along with such examples bring to life this period and help readers to begin to make connections to varying art forms and artists who would follow this period.

Forging a Modern Identity – Masters of American Painting Born After 1847 edited by James W. Tottis is available for purchase through D. Giles Ltd. with ISBN 1904832067