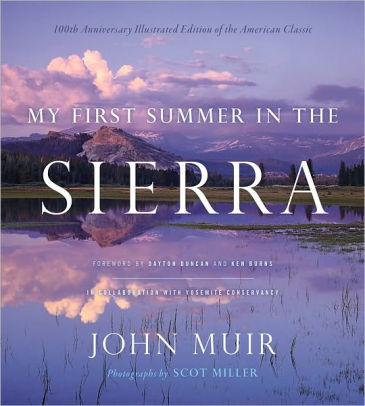 Picture getting to see some of the most breath-taking parts of Yosemite National Park before it ever was Yosemite National Park. Think of sweeping mountains, fresh, gushing water and abundant plant life. 19th century romanticism only touched on how beautiful these landscapes were and in some cases still are. Now, combining that 19th century writing with beautifully rendered 21st century photographs, this illustrated edition of a classic is not something that is easily put down.

The Power of Descriptive Narration

John Muir’s adventure into the Sierra is wonderfully documented, pairing stunning nature photography with an in-depth personal narrative that makes you feel as though you are along side him, taking in the scenery and experiencing everything that untamed nature has to offer.

“Before noon,” Muir writes, “we passed Bower Cave, a delightful marble palace, not dark and dripping, but filled with sunshine, which pours into it through its wide-open mouth facing the south. It has a fine, deep, clear little lake with mossy banks embowered with broad-leaved maples, all underground, wholly unlike anything I have seen in the cave line even in Kentucky, where a large part of the State is honeycombed with caves.”

Muir creates pictures, not only with the included photographs by Scot Miller, but also with his keen sense of detail and explanation which evident throughout his narrative. Combined with the equally as detailed photographs, Muir delivers with My First Summer in the Sierra.

My First Summer in the Sierra and John Muir

Originally published in 1911, My First Summer in the Sierra enticed many people to visit the Yosemite area. John Muir was a young Scottish immigrant who had not yet become the famed naturalist that he would be later in life. Later dubbed, “John o’ the Mountains,” Muir first trekked into the Sierra shortly after the end of the Civil War.

After falling in love with the area, Muir later returned in 1869 to work with a group of shepherds as they herded a flock of 2,500 sheep toward the headwaters of the Merced River. My First Summer in the Sierra captures much of this adventure, including vivid descriptions of what Muir under-went during his time in the unspoiled area of Yosemite.

Other books that document and explore the American landscape include Joseph Sohm’s Visions of America: Photographing Democracy.

My First Summer in the Sierra by John Muir with forward by Dayton Duncan and Ken Burns with photography by Scot Miller is available for purchase on April 12, 2011 with ISBN 9780618988518 through Houghton Mifflin Harcourt.