Who doesn’t love a period book set against a vast English countryside complete with a sweeping country manor and a couple of amateur sleuths that are eager to get a break from Victorian London and the murder mystery that they just solved?

A Merriweather and Royston Mystery

Death Comes to Dartmoor is the second installment of the Merriweather and Royston Mysteries. The novel picks up on the heels of the first book. That said, this installment is hard to get into and fully understand the backstory if you have not read, The Butterfly Conspiracy. It is beneficial to read the first book of this series before you begin Death Comes to Dartmoor or you might be lost and not be able to get into the mystery that unfolds for our pair of zoologists whose vacation doesn’t go anywhere near as planned.

Murder in the Village

I don’t know what it is about Devon, maybe it’s the moors and the overall vibe of the village, but there are so many novels like And Then There Were None and even The Hounds of the Baskervilles that use the moors and Devon as their setting. Much like stories before, our main characters Merula Merriweather and Lord Rayven Royston arrive in Devon with Merriweather’s maid, Lamb, and Royston’s valet, Bowspirit only to find that their idyllic country getaway is going to be far from what they expected.

Oaks, their host, is acting incredibly strange. The specimens that he collects are thought to be coming back to life and then, his maid disappears. Oaks is bordering on delusional and the villagers are calling for his blood. Almost inevitably, the maid turns up dead and Oaks is the main suspect, leaving Merriweather and Royston to delve into the mystery that they have walked into and prove Oaks’ innocence.

In The Butterfly Conspiracy, we learn that Merriweather does not know who her parents are. She has lived with an aunt and uncle who have loved and raised her, but she is still determined to find out where she comes from. Merriweather’s parental lineage comes into play again when she encounters a man from a traveling theater company at a local gathering who makes the comment that she looks so much like her mother. Merriweather is given a lead into her mother’s past that she is eager to flesh out and it will be interesting to see what the story of her parents are and how she reacts when she finally uncovers the truth behind her parents’ past and how it will play out in future books within this series.

Death Comes to Dartmoor: A Merriweather and Royston Mystery by Vivian Conroy will be released on August 13, 2019, from Crooked Lane Books with ISBN 9781643850092. This review corresponds to an advanced electronic galley that was supplied by the publisher in exchange for this review. To snag special pre-order pricing click the link above! 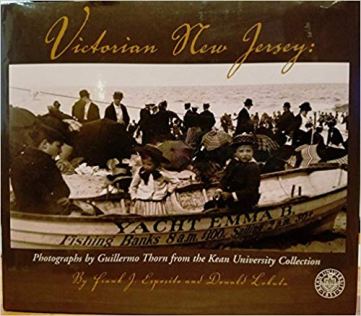 When you think of New Jersey today it is easy for your mind to drift to Snooki, Italian-Americans, lots of hair spray, fist pumping and any other stereotype that New Jersey has been blasted with over the course of the past few years with programing like The Jersey Shore and The Real Housewives of New Jersey. However, what has been forgotten and pushed aside is that New Jersey is rich in history that pre-dates the spray tans and hair-poofs.

New Jersey and its History

New Jersey is full of stories, legends and history that go back to the early days of the colonization of America. We are a state that has seen a lot of big changes and life happen here. New Jersey has seen Revolutionary war battles, visits from presidents, natural disasters, grand estates, big inventions and famous people.

Frank J. Esposito and Donald Lokuta explore the early days of New Jersey, specifically the Victorian time period, in their book Victorian New Jersey: Photographs by Guillermo Thorn from the Kean University Collection. They open their catalog with the biggest part of New Jersey lifestyle– the Jersey shore. Here, they share Thorn’s photographs of Asbury Park and Cape May, the beaches that dominated before Seaside Heights became the huge attraction.

From there, they break the photographs into other categories that include:

Esposito and Lokutachoice of focusing on Thorn for this collection is most interesting. Thorn was born in 1837, before the invention of photography. He grew up in the time where photography was new, fascinating and quickly becoming a popular art form. Thorn is best known for his sentimental personality and deep appreciation for the past, which are evident in many of his photographs.

Overall, Esposito and Lokuta’s Victorian New Jersey: Photographs by Guillermo Thorn from the Kean University Collection is an interesting and well-researched catalog that is an asset to those who appreciate and wish to learn more about New Jersey’s rich and vibrant past.

The exhibition originally ran at the Kean University gallery in Union, New Jersey from fall to spring in 2005.