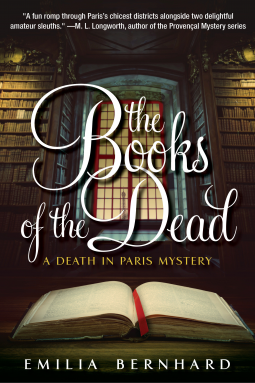 The Books of the Dead by Emilia Bernhard had it all for me: Paris, death and of course, librarians. My inner nerd girl was squealing when I received the galley for this novel. I think I was so drawn to it because it had an air of Jonny Depp’s The Ninth Gate which I have watched probably too many times to count.

American sleuth Rachel Levis stumbles upon the body of an employee of the French national library strangled in the bathroom of a cafe. Having solved a murder, with her best friend Magda, only 18 months before, Rachel reaches out to Capitaine Boussicault for help.

She immediately goes undercover as a librarian to try to figure out which one of the man’s colleagues could have offed him. Almost just as quickly as she is undercover, the drama really begins to come into play: first, a priceless antique book is found mutilated and then, her favorite suspect for the first murder is found dead in the stacks. Boussicault pulls Rachel from the investigation. However, she and Magda are dedicated to solving this mystery and take the investigation into their own hands.

This is definitely a cozy mystery where the amateur sleuths win over the professionals and become part of an unbelievable investigation. You will have to suspend your sense of realistic cream investigations to thoroughly enjoy the novel, it has all the pieces to it: the international setting, the pair of best friends solving crimes and a slightly absurd reason to murder someone. I am excited to see where this series goes and what other kinds of trouble our two girls will get into next!

The Books of the Dead: A Death in Paris Mystery

by Emilia Bernhard is scheduled to be released on October 8, 2019, from Crooked Lane Books with ISBN 9781643851570. This review corresponds to an electronic galley supplied by the publisher in exchange for this review. To be linked to special pre-order pricing, click the link at the top of this section. 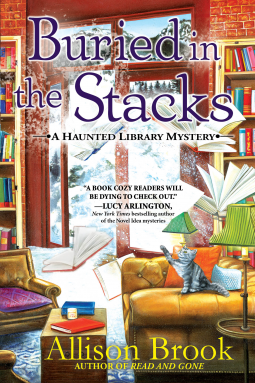 With the third installment of The Haunted Library Mysteries, Buried in the Stacks opens with our favorite librarian, Carrie Singleton, juggling the growing problem of the homeless taking shelter in the library and a new murder.

The Murder of a Rival

Carrie has been thrown into the role of Sunshine Delegate for the library. Her first task is to visit her rival, Dorothy, a fellow research librarian who is recovering from a fall. During her visit, Carrie is shocked to find out that Dorothy believes that it is her husband that is responsible for her fall. She is claiming that he pushed her. Even stranger, she is also claiming that it was her husband that caused the death of her Aunt Evelyn several years before. Aunt Evelyn is the haunted library’s resident ghost. Dorothy eventually recovers from her injuries and returns to work, but upon her return home, she is killed in a car accident. Ghost Aunt Evelyn begs Carrie to uncover who killed her niece as well as who responsible for her death.

A Quest for Warmth

The Haunted Library is in Clover Ridge, CT which means, it is in a part of the United States that is frigid when winter comes. For Carrie, this also means that a large population of homeless people are using the library as a refuge from the February frost. Some of the homeless are loud and disruptive which is causing the patrons of the library to not want to come in or bring in their children for the programs that they are offering. Carrie is excited when a vacant house is purchased to turn into a retreat for the homeless but is quickly disheartened when she learns that the committee in charge of rehabbing the house is not on the up and up.

As with any cozy mystery, there is a bevy of storylines that transgress the pages. In Buried in the Stacks, we have the homeless plotline, the murder of Dorothy (and Evelyn), Angela’s wedding where Carrie is her maid of honor, the search for Smokey Joe and of course, the interference of the library’s resident cat. There is a lot going on in this book and a lot to keep straight as you read your way through it, however, that is what I always have loved about books like this. Cozy mysteries offer a plethora of loveable characters that are in crazy situations with several subplots and big life changes going their way. Buried in the Stacks delivers all of this and more. What I especially love about this series is the addition of the haunted library. I enjoyed how Ghost Evelyn and Carrie worked together to talk out the mystery, shares clues and uncover secrets. It was an element that was unique to this book and series.

Buried in the Stacks: A Haunted Library Mystery

by Allison Brook from Crooked Lane Books is scheduled to be released on September 10, 2019, with ISBN 9781643851389. This review corresponds to an advanced electronic galley that was received from the publisher in exchange for this review. To be linked to special pre-order pricing, click the link above!